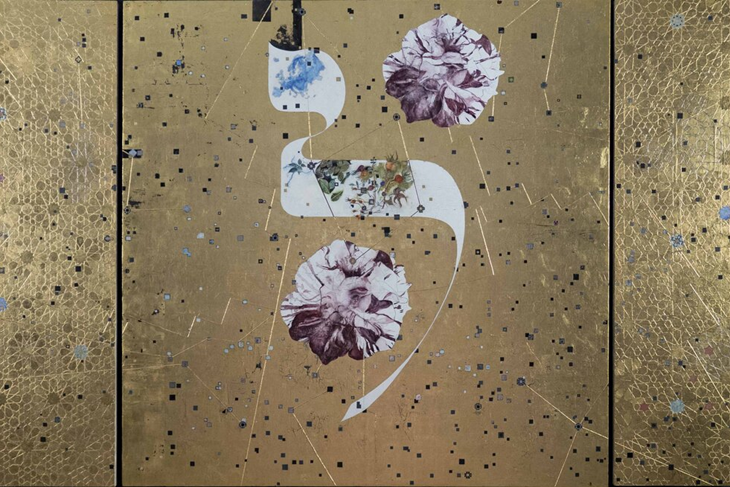 In honor of the 75th Anniversary of the Liberation of Auschwitz-Birkenau.

Departing from traditional Holocaust memorials, Sparking Light is a golden piece, illuminated with 23k “H” gold and 23k red gold issuing from a black clay ground. Star-filled, it shows the night sky exactly as it was on January 27, 1945 during the Liberation 75 years earlier. The painting’s two side panels are inspired by the ceiling of Tempel Synagogue in Kraków, weaving a pattern of Moorish Orientalism. The mystical 13 Petalled Rose, symbolizing the thirteen aspects of mercy, appears twice – above and below: Like a rose among thorns, so is my beloved among the maidens (Song of Songs). The rose itself is striped with red symbolizing judgment and accountability and with white representing loving kindness. The Lamed, the 12th letter of the Hebrew alphabet, is filled with rosehips, nourishing even in winter. In Gematria, Lamed – with its numerical value 30 – combined with Vav refers to the 36 righteous people who save the world from destruction. In this monumental work, Lamed represents the prominence and necessity of learning and understanding and beckons all of us to create a peaceful future.