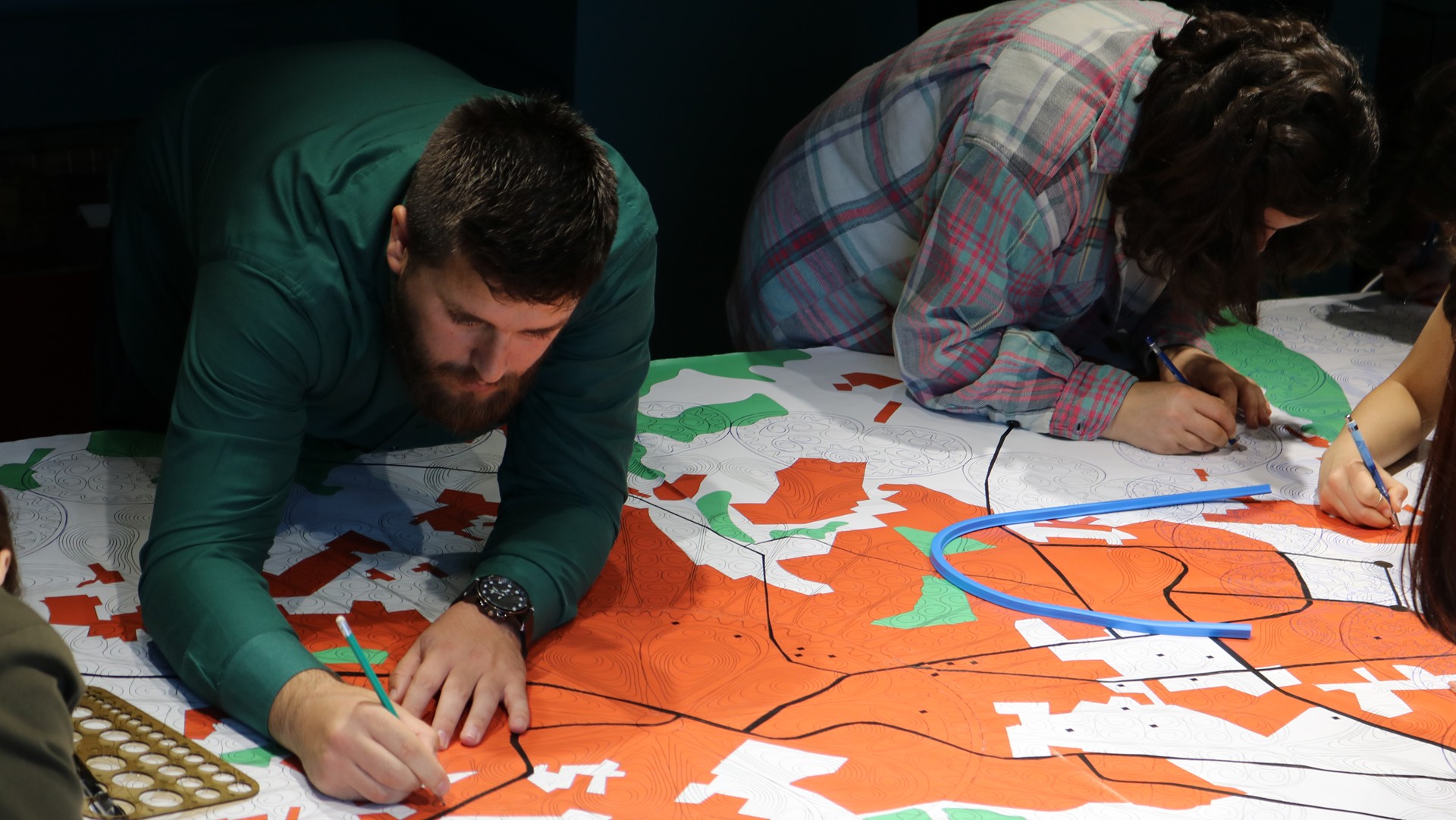 Hard at work in Pristina transfering the city map.

Pristina: The Flowering celebrates 8,000 years of vivid cultural history. Created with participation by students, artists, and scholars from all ethnicities and 38 municipalities, Pristina: The Flowering interweaves with the finest golden lines of filigree the past, present and future of this young and flowering city. Words and phrases of significance, in many languages, follow the roads of the city map as they move through time and space. Gracing the greens of the city’s many parks are archaeological symbols, illuminating the sun of the Dardanians, the Smira labyrinth with its cycle of birth, death and rebirth, marking the underworld, this world and the world beyond; spirals, musical instruments and song accompany the patterned designs drawn upon the bright faces of young brides.

We rejoice that, through art, the world will know this city, a place of life. May peace continue and freedom flourish! 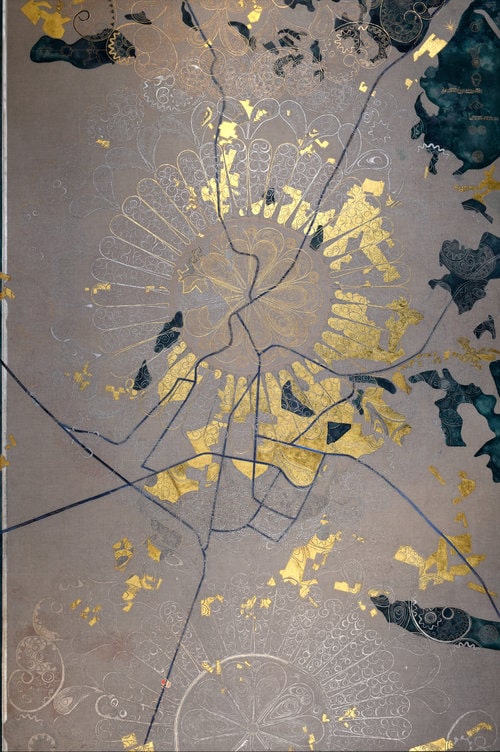 Artistic Director Ellen Frank, with students, artists and scholars of all ethnicities, completed the newest Cities of Peace project: Pristina: The Flowering, in Pristina, Kosovo.

Our Pristina Consortium included: The Museum of Kosovo, The University of Prishtina, Cultural Heritage without Borders.

As evidence of the impact of Cities of Peace cultural diplomacy, former interns from Armenia traveled to Kosovo to participate in the training of new Cities of Peace leaders. Our consistent messaging included international press and social media provided by all institutions in the Consortium. The Museum of Kosovo created a documentary film in Albanian, Serbian, and English. Stay Tuned!

The grand unveiling of our eleventh Cities of Peace painting occurred on June 12, 2018, Kosovo Peace Day, at the Museum of Kosovo.

The Cities of Peace Pristina Laboratory, housed at The Museum of Kosovo worked to reduce the risk of extremism by its inclusivity, young people from all ethnicities participated in the creative, interactive art-making, validating and strengthening community cohesion and promoted visual and historical literacy.

The Cities of Peace Pristina Laboratory achieved conflict transformation by:

The Cities of Peace Pristina Laboratory is among the first Challenge Grants ever awarded by the Robert F. Schumann Foundation.

Abigail Disney says about Cities of Peace: “My friend Ellen Frank is doing wonderful peace work in many places. As the founder and artistic director of Cities of Peace, she continues the legacy of her own mother’s courageous work to bring UNESCO into the Los Angeles public schools in the 1950’s: ‘only with universal, international understanding can there be any hope for an enduring world of peace.” Cities of Peace affirms understanding as the prerequisite to peace.

“In my more than 40 years of working for international and interreligious peace I have never seen anything as powerful, healing and promising as Cities of Peace.” Rabbi Jack Bemporad, Center for Interreligious Understanding, upon inviting Cities of Peace to Kosovo.

“Every day the world throws reasons to despair at us. Cities of Peace does more than keep hope alive. By preserving and highlighting the rich cultural heritage of our cities and through its peace curriculum, it equips us with the resilience to resist hate and to fight for what is the best in us.” Fred Mandell, CEO and Founder, The Global Institute for Arts and Leadership